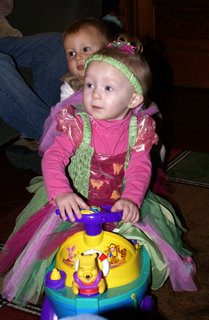 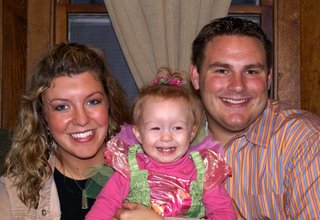 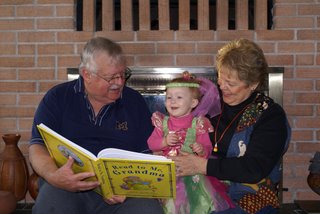 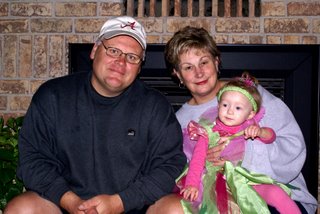 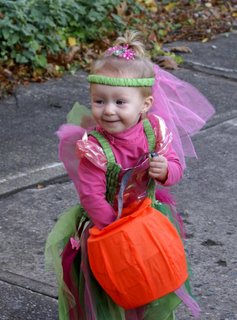 Maddie was a fairy princess for her second Halloween. She thought she was something else for sure. We went trick-or-treating at both Grandparents, some neighbors and then handed out candy at our house. We had a few visitors. Jonah Carlson (Lion) and Maddie had fun riding around on her boat. Here are lots of pictures. :) 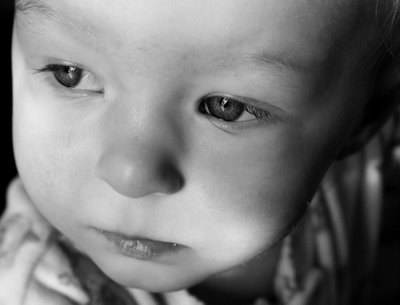 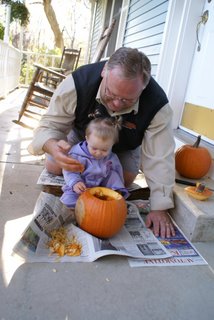 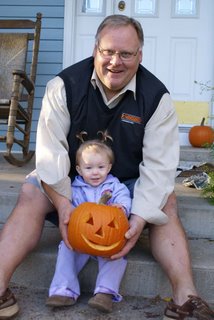 On Sunday Oct. 29th Maddie carved pumpkins with her Grandpa Hosford. She wasn't sure about the yucky feeling on her hands, but enjoyed watching Papa get messy. :) Note the AMAZING carving job...by the pumpkin artist. 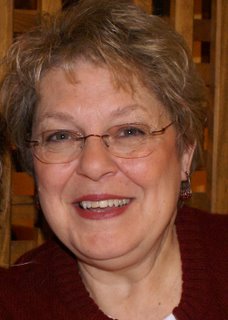 Oct. 26th was my Mom's Birthday.(The number shall remain quite) :) We had a wonderful dinner out with my Dad and Mom at Pietros, where Maddie actually sat and ate well. :)
Happy Birthday Mom!! 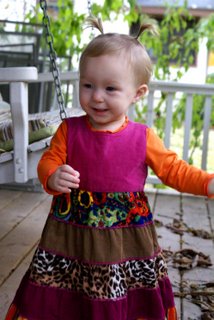 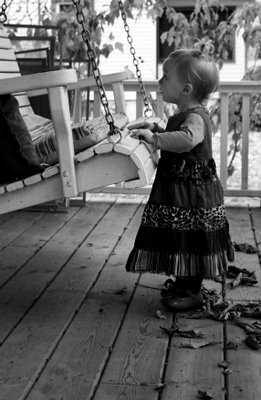 Here are a couple of fun pictures of Maddie. :) 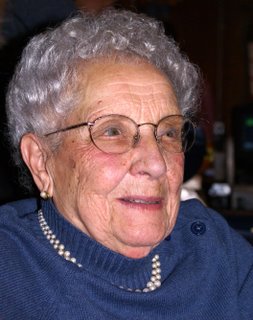 This past weekend I went to Manistee MI with my Mom, many of my Aunts, a cousin, and most important, my Grandmother. My Grandma turned a young 88 last week. She is undoubtedly one of the most amazing women I know. Not only will she still shop till she drops, she watched the tigers game with me and knew what was going on the whole game!! :) Madilyn calls her G.G. for Great-Grandma of course. It brings such a smile to her face when Maddie says "hi GG!" on the phone.

I hope that I not only will be a mother like her but a grandmother liker her as well. She is an inspiration to me. 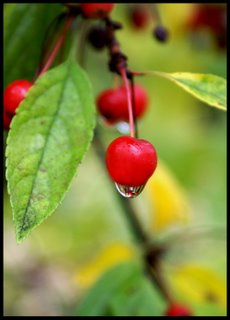 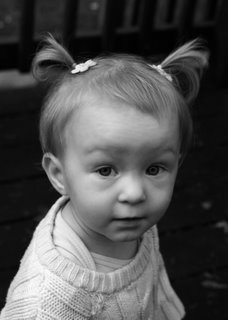 Today was kind of a gloomy outside and an unexpected day home for me. Tracy wasn't able to watch Maddie today because she had another fainting spell at work yesterday. They are keeping a close eye on her and our little niece-to-be. Please keep Tracy and Gracie in your prayers as she continues in her prego adventure. :)

So after stopped to make sure Aunt Tracy had everything she needed ( including hugs from us) we spent some time outside in the gloomy weather. We just can't stay inside all day...the house is starting to close in on us. Maddie spotted these little berries along our driveway and was just giddy. It may have been because they were so tiny...I'm not sure, but she just thought they were the neatest thing. :) Anyway, here are a couple of pics from today. 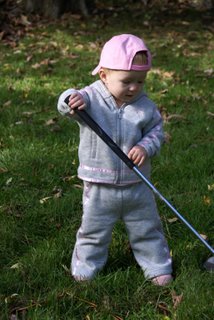 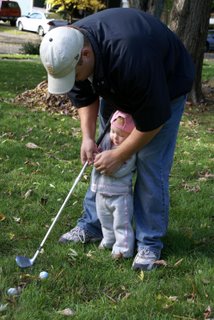 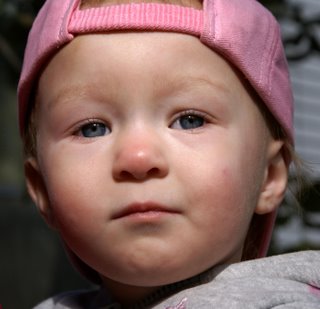 Well, the clubs are a little big yet, but Maddie is on her way already. :) Here a a few pictures of Tom showing Maddie how to swing a golf club. :) The close up Tom took. Nice one babe! :)

Not the best shot, but I wanted to post some of the beautiful colors around Rockford. I plan to get out and take some more pictures. I don't think I could live somewhere that the trees don't change colors. Even getting on the expressway is beautiful right now, and that's saying something! :) If I didn't look like a crazy nut, I would stop and take a picture on the over pass! (just kidding Dad, safety first) :) 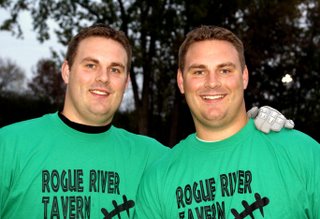 Tom and some buddies are in a flag football league this fall. Living out the glory days for sure. They didn't win tonight, but I'm sure they will come back strong next week. :) Right boys?? Thank you goes out the Rouge River Tavern, who is their sponsor.
Here is a picture of Tom and Dan. Which one is which?? :) 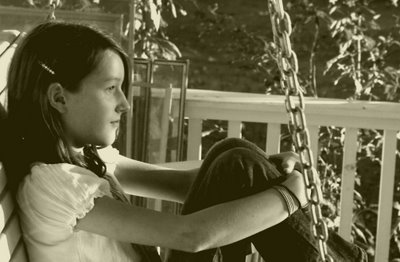 Here is a neat picture of another one of my nieces, Isabella. She just looked so sweet sitting on our front porch swing, had to take a pic. 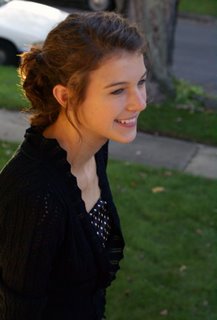 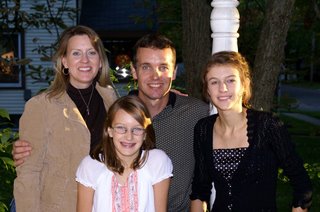 My niece Rebekah got all dolled up at our place on Saturday for the Rockford Homecoming. She looked beautiful...and I feel OLD. :) 16 years old...good lord, time flies. 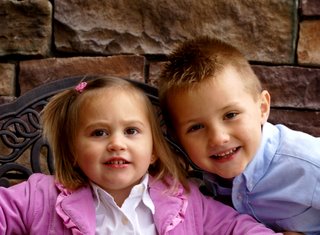 Our friends Ryan and Rebekah's kids Gavin and Ella are getting SO big. Gavin (or godson) is now 4, turning 5 in March. Ella is 2 will be 3 next June. Time is just flying by so darn fast. In a few months there will be a third addition to the Pokorzynski family. We can't wait to meet the third Pokor kido! Madilyn and I spent some time with Rebekah and the kids today, playing hard at the park. 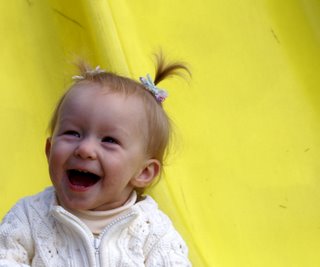 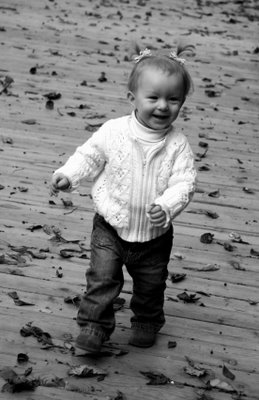 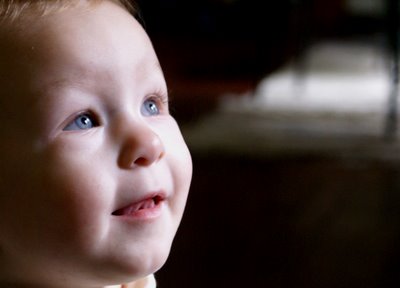 Well, I got a new "toy".... We got a new camera this week, and I am as giddy as a school girl. :) I can't find enough time to shoot. I have really started to enjoy it. So, if you can believe it, I will post MORE pictures. I know you are thinking good lord women, you have enough already. :P You NEVER enough pictures. Here are a few new ones of Maddie. 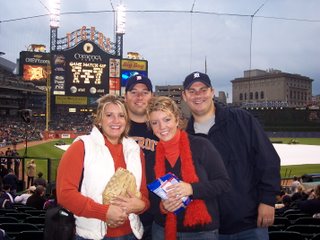 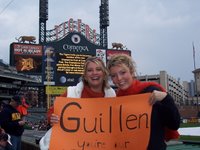 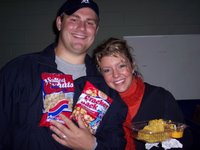 Ok, so I am the first to admit that I have never really been that big of a baseball fan. Let me restate that. Until this past Saturday ( with the exception of one inning of a White Caps game 8 years ago) I have never been to a entire baseball game in my life, let alone screem for a professional team. :)

On Saturday, Tom, Jason, Johanna and myself packed up around noon and headed East for Detroit to see the Tigers play the Kansas City Royals. Maddie was at Grandma and Grandpa Hosfords for the weekend. When we arrived the weather, was lets just say less then stellar. :) Cold, rainy and just bla. That didn't stop the fun! :) Not with the four of us, that's for sure

The game started off...not so good. An hour and a half rain delay...thank God for beer. :) We were down 0-7 in the first inning. Yeah, not so good. We had AMAZING seats though ( thanks to Johanna's awesome ebay'n skills), right behind the catchers mound, 17 rows up. Of course we ate everything that you could possibly get at a baseball game, and if I listed it all you would probably get sick. My only "rule" was that I had to have peanuts and cracker jacks ( cheesy I know, but I don't care). Even with Johanna's signs for Carlos Guillen ( who gave her a wave and a nod) and all the screeming, the Tigers ended up losing a sad game that night.

We woke up on Sunday, ready to head out and starting talking...If the Tigers won THIS game they would clinch the AL Central. Something they have not done in 20 some years...and since we were already alllllll the way over there...we should GO. :) We walked to Comerica Park for the second day in a row and found the "nicest man" that just happen to be "selling" tickets outside the park. :) The signs for the day before we tossed as we didn't think we were going to another game so Johanna made her own...see picutures below...yuck. :)

We ended up getting great seats and sitting through a LONG game. We ALMOST won it...but I won't get into that. Grrr...12 innings later, another loss. But it was a great weekend, so much fun. I am now a true baseball fan. Not as big as Johanna, but I just might strive to get there someday. 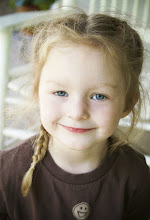